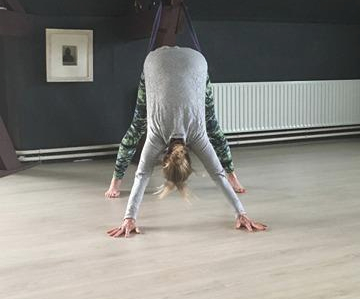 May 2003 ¬ Indigo Yoga for Children of all ages; the fine art of teaching children , Santa Cruz, California Led by Pamela Hollander

April 6 and 13 2019¬ Going beyond the 5 elements, Stillness in Yoga, Doorn, Led by Gita Schuit, acupuncturist, and Anoshe Overington

TRAINING THROUGH WORKSHOPS and INTENSIVES

September 28 – Oktober 18 ¬ Forrest Yoga: 22 day Intensive training  with Ana Forrest, every morning 6-9 am, ‘a physical and mental journey deep into the core of your very being’.

2006-2009¬ Workshops on a regular basis at different studios together with a pilates teacher. The workshops consisted of half pilates and half yoga.

2012- current ¬ Yoga in Vianen for the elderly

2021 As of June Yoga @ Regina Coeli, classes in English

2022 As of december Yoga for Companies through ‘Workit’

Her teacher in California referred her to The Temple of Kriya Yoga when Pauline moved to Chicago in 2003.

She is very passionate about improving the quality of life through yoga.